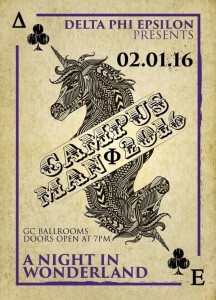 According to a Delta Phi Epsilon member, every year the sorority raises $10,000 on average. This year, they are planning on raising $15,000 to help fight cystic fibrosis.

According to Mayoclinic.org, Cystic fibrosis is an inherited disorder that causes severe damage to the lungs and digestive system, affecting many children at a young age:

Cystic fibrosis affects the cells that produce mucus, sweat and digestive juices. These secreted fluids are normally thin and slippery. But in people with cystic fibrosis, a defective gene causes the secretions to become thick and sticky. Instead of acting as a lubricant, the secretions plug up tubes, ducts and passageways, especially in the lungs and pancreas.

Tickets for the Night in Wonderland event are $5 for general entrance, $10 for VIP which includes dinner. The event is taking place on Monday, February 1, 2016 at 7 PM in the GC Ballrooms, FIU.

For more information, or if you would like to become involved in the event, feel free to reach out to Carolina Gonzalez at [email protected]

About the Cystic Fibrosis Foundation and Delta Phi Epsilon, from the passioncff.org page:

In 1955, the Cystic Fibrosis Foundation was founded by a small group of parents of CF patients who wanted to advance understanding of this little known disease, to create new treatments and specialized care for their children, and to find a cure.  One of those founding parents was Phyllis Kossoff, a Delta Phi Epsilon sister, from the Delta Chapter at Hunter College in New York. Phyllis’ daughter Stephanie had CF, which eventually took her young life.  In 1957, Phyllis stood before a Delta Phi Epsilon convention and told her sisters about Stephanie, and the growing CF Foundation family, and asked for help. The response was overwhelming.  Delta Phi Epsilon has continued to support the Foundation through fundraising, increasing awareness and advocating for those with CF