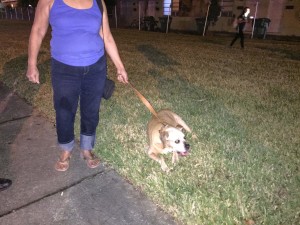 Sweetwater, FL – February 16, 2015 – Two Sweetwater Police Officers and two Sweetwater residents saved the life of an injured dog in a show of compassion late Monday night as the stray dog was headed toward fatal danger on 107 Avenue and South West 6th Street in Sweetwater. Police were called to the scene when a Sweetwater resident noticed the dog was disoriented and was about to cross 107th avenue. The story ended with a happy ending as the dog was adopted by another local resident with a big heart.

The dog, an adult yellow lab mix, was wandering the streets of Sweetwater disoriented and visibly injured when one witness stopped his car on the southbound side of 107 ave near 6th street to prevent the dog from being run over. Speeding motorists had to swerve to avoid the dog as the dog collapsed near the rear of the parked vehicle on the right lane of 107th avenue. Sweetwater Police were called to the scene, with Officer Arche and Officer Garcia responding. Animal control was called with an ETA of almost an hour.

With a small crowd of onlookers forming, one Sweetwater resident, Rosamaria Velez, volunteered to take the dog in and adopt the dog. “I love dogs” said Velez as she brought the dog into her car with the help of police officers, “I have plenty of space in my home and will take it to the vet in the morning.”

We are awaiting further info on the status of the newly adopted member of the Velez family.