Sweetwater, FL – A Florida Department of Law Enforcement (FDLE) investigation initiated by Sweetwater Police Chief Placido Diaz has confirmed the rumors about theft within the Sweetwater Police Department Evidence Room by police department employees. A number of items such as handguns, narcotics, and other valuables were stolen by members of the police force from the two police evidence rooms, one of which lacked surveillance cameras monitoring the room.

The revelation was made hours ago by the Sweetwater Police Chief during a full press conference at Sweetwater City Hall. During the briefing, the police chief read from an official Investigative Report provided by the FDLE that provided details of the audit performed early June through early August of 2015 by two investigators from the state law-enforcement agency. The findings were recorded through the use of a computer spreadsheet.

“The conclusion is that there are missing items and the theft occurred by employees of the police department,” reported Chief Diaz. “My goal is to bring closure to the situation, if it’s a criminal violation, we will treat it as such.. but in any case they will be held accountable.”

This is the latest in a long list of troubles for the Sweetwater Police Department. In recent years, two different police chiefs have abruptly retired, at least three officers have been arrested (one for credit card fraud, another for buying crack, and another for driving with a stolen tag), and constant rumors of corruption have plagued a small city police department once known for it’s effectiveness and superior response times.

According to the FDLE investigation, some of the violations that took place were:

According to the police chief, all investigations have been made in conjunction with Sweetwater PD Internal Affairs (IA) and FDLE. Although the names of suspects we not officially disclosed during the press conference, it’s expected there will be a number of disciplinary actions made, of which can include arrests and firings.

Of the 19 missing weapons from the Evidence Room, most of them are handguns, though it is not known what caliber they are, the police chief didn’t confirm whether the police department had the serial numbers for all the missing weapons.

He added his concern over the missing weapons and where they might end up:

“With the gun violence the way it is today, my concern is that they wind up in the wrong hands and my priority is to locate those weapons without jeopardizing anything another agency may be doing.” said Chief Diaz. “A gun in the hands of a delinquent is dangerous and shouldn’t be in the street.”

Among the items missing from the police property room were 19 bicycles. This is two years after a Miami Herald article from October of 2013 reported on a press conference by then-interim-Mayor Jose M. Diaz announcing a police bike patrol unit for Dolphin Mall. In the same press conference, Jose M. Diaz revealed there was evidence of thousands of dollars missing from the police evidence room.

It is not known whether the bicycles are police-issued mountain bikes.

Last night during a special commission meeting, Vice Mayor and Commission President Jose M. Diaz commented on the FDLE investigation into the Police Department’s “famous property room”. He urged the current administration to continue the investigations which, according to him, started in August of 2013. “We were extremely instrumental in working with the FBI and FDLE.” said the Vice-Mayor, during last night’s meeting in which Mayor Orlando Lopez was not present.

Last night, Commission Vice-President Jose Bergouignan also commented on the investigations which according to him were taking place because of violations that happened since former Sweetwater Mayor Manny Maroño was in power: “These are things that were happening [two administrations ago].”

When asked about the comments that this current investigation was related to one that began in the administration of former interim-Mayor Jose M. Diaz, Chief Placido Diaz denied the allegations:

“This is completely separate (from the previous allegations of investigations).” He further added,”One of the things that didn’t happen in the past was cooperation (with investigators).”

When asked if he thought previous administrations were aware of the violations in the Sweetwater Police Evidence Room, Diaz replied: “many of them must have known what was happening,” referring to Manny Maroño and Jose M. Diaz.

Commissioner Duasso Not Sure About FBI Investigations 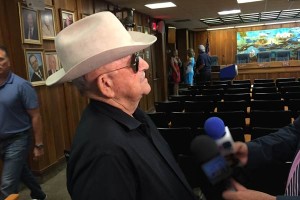 Longtime Sweetwater Commissioner Manuel Duasso has been among the group of politicians warning the public with allegations of active FBI and FDLE investigations within Sweetwater since the 2013 incident in which former Mayor Maroño was indicted for corruption.

During an interview to local news at today’s press conference, Duasso mentioned “we knew that there were investigations by the FBI [and FDLE] a long time ago but not now.. Now Chief Diaz has released this information.” 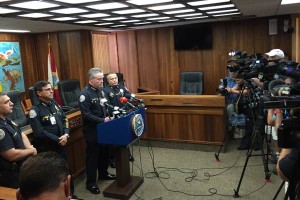 In response to the question of whether the recent changes in addition to these revelations were causing morale to drop in the department, Chief Diaz reported that 90% of the police force is satisfied with the changes brought by the new chief, further adding that there will always be a small group that resists change. He also commented on the commission’s refusal to ratify him as the permanent police chief, saying he doesn’t know why [the commissioners] won’t ratify him, expressing his desire to focus on his job of police chief.

On Wednesday afternoon, FDLE denied SWEETWATER POST a request for a copy of the excel spreadsheet that itemizes details of the audit due to the ongoing investigation.

No one has been officially charged with a crime.