Sweetwater, FL – Columba Bush, wife of former Florida Governor and current Presidential Candidate Jeb Bush made a surprise visit to the Mildred & Claude Pepper Senior Center in the City of Sweetwater. This marks the first visit from a Bush family member since Jeb Bush held a campaign event in Sweetwater's Mas Canosa Youth Center in 2015.

Thank you to everyone at the Mildred & Claude Pepper Senior Center for having me! pic.twitter.com/r2LpsKMlxy

The visit of the Senior Center in Sweetwater marks the most recent of her elderly center tour throughout Miami, with one Sweetwater Commissioner, Isolina Maroño, making an appearance with the wife of the presidential hopeful.

As candidates get closer to the Iowa and New Hampshire Caucuses, Jeb Bush is making a stronger effort to compete for the Republican nomination, launching advertising negative campaign ads against Florida Senator and West Miami native Marco Rubio.

Aside from Governor Bush, previous notable political figures campaigning in the Sweetwater/FIU area have included: 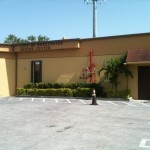 Known as "El Comedor" to locals, the Senior Center is one of the most popular spots for political campaigns in Sweetwater, with nearly every candidate in last year's local elections in Sweetwater making a visit. The Senior Center, with a 2014 cost of $909,103 (2014 city budget) provides senior citizens with daily activities, lunch, and according to the City of Sweetwater website, provides services for 200 participants Monday-Friday.