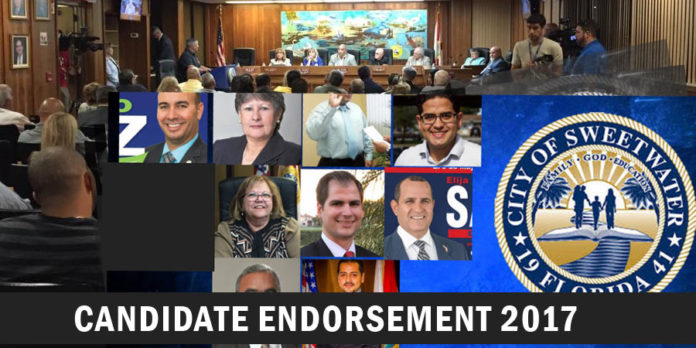 Sweetwater, FL – Elections in the City of Sweetwater are just a few days away, and for the first time in the three years since its existence, Sweetwater Post will be officially endorsing one candidate from each of the four groups of candidates running for commissioner.

Selecting the four candidates was a tough choice, as each candidate has desirable and undesirable traits.

The endorsed candidates are selected by the best-ranked candidates from nine categories, with each category scoring from 1 to 5 (5 being the best):

The ranking and scoring system is a first in Sweetwater Elections and the most logical way to assess the candidates running for office. The scoring is based on historical facts, interviews and months of information gathered by Sweetwater Post. A brief explanation of the scoring is included with each group.

Sweetwater Post endorses David Borrero for Group 1 commissioner. Group 1 is an interesting group, as there were 3 candidates originally, with interm-commissioner Eduardo Suarez abruptly dropping out of the race. Both David Borrero and Isidro Ruiz are newcomers to the political stage in Sweetwater, a small municipality in which political dinosaurs running unopposed was commonplace. David Borrero scores high on intellect, honesty and professional/personal history, working for three Sweetwater administrations as the Grants Administrator, graduating from FIU and graduating with his Masters degree. A lack of verifiable community engagement in the past few years and a potential to use Sweetwater as a springboard to state or federal office (like his former professor Marco Rubio) gives him average scoring in loyalty to the community. It will be a very pleasant sight to see Borrero, an FIU grad, representing Sweetwater residents in the Commission.

Sweetwater Post endorses Marcos Villanueva for Group 2 Commissioner. Group 2 candidates consist of two challengers and an incumbent of 16 years. One of the challengers, Jose Mejia, scores low points based on his criminal record, lack of employment history, lack of ideas, and a lack of verifiable community engagement aside from this political campaign. The incumbent, Jose Bergouignan, is the only candidate with prior military service, honorably serving in the Marine Corps. With 16 years as a commissioner, Bergouignan has seemingly become just now aware of the problems plaguing the governing body of the city. Although one of the more capable commissioners, his record shows an inability to see past personal differences and deal effectively and pragmatically with issues in government.

Sweetwater Post endorses Saul Diaz for Group 3 Commissioner. Group 3 features Saul Diaz, a 2015 candidate for commissioner, and Joniel Diaz, the son of retired Sweetwater political dinosaur Jose M. Diaz. Joniel Diaz, in the tradition of prehistoric politicians in Sweetwater, has avoided all requests for interviews or comments from Sweetwater Post or any other known media outlet covering the election, except for one instance in which Sweetwater Post encountered both Joniel and his dad while they canvassed the area in front of 109 Tower. Suffice to say, Joniel had to promptly drag his emotionally-wrecked dad away from the area, avoiding any potential scandal involving assault on a member of the press.

Saul Diaz scored the highest marks of any other candidate in this election, with a near-perfect score of 41 out of 45 points. Saul is literally the most dedicated person to the Sweetwater community you can meet. For at least four years straight, no matter how boring they are, Saul has attended nearly every Sweetwater commission meeting, a feat not even Commissioners or the Mayor himself can boast of, much less any resident. Why is this important? It shows a willingness to get involved and learn the details of community and governmental issues faced by Sweetwater. Saul spoke with actions when he successfully sued the city to force a voter referendum on the sale of a city-owned land. This is extremely rare for a Sweetwater resident to be this committed to the important things that actually matter in a government. Not to mention the years of community service and volunteering Saul does through the local Boy Scout troop. Saul is by far one of the best candidates Sweetwater has had a chance to vote for in a long time, if not ever.

While recent news reports point to Saul being involved in an absentee-ballot investigation, Sweetwater Post considers the investigation to be a strategically-timed underhanded political attack from certain groups used to playing dirty politics in Sweetwater. It’s obvious the “investigation” will suddenly be dropped once the election is over.

Sweetwater Post endorses Isolina Maroño for Group 4 Commissioner. Group 4 is a group with two individuals with a long history of politics in Sweetwater. Maroño, the incumbent, is the mother of convicted former Sweetwater Mayor Manny Maroño, and Holtz-Alonso was a Sweetwater commissioner during the early 90s, before failing to be reelected multiple times during the mid-late 90s. After a long period away from politics, Holtz-Alonso quietly began attending commission meetings around 2014. Holtz-Alonso, while clearly an individual that understands the responsibilities of a commissioner, scores low on ideas and honesty/transparency as she has completely avoided any press interaction and failed to provide her most important issues. Although she as a former commissioner, she also scores low on loyalty to the community, with little to no community engagement or service aside from her election campaign. Lastly, Holtz-Alonso also scores low on likelihood of influence, as she is metaphorically attached to the hip of Idania Llanio, a figure in the commission with ties to Jose “Pepe” Diaz and a notoriously partisan and vindictive record. High likelihood Holtz-Alonso will be another seat-warmer on the commission if elected.

Isolina Maroño, while receiving the endorsement for group 4, scored low on ideas, average on most categories and high marks for loyalty to the community, being involved as a volunteer and community figure years before she was elected in office. Although her dedication to the community more than makes up for any political flaws, Maroño has much room for improvement.