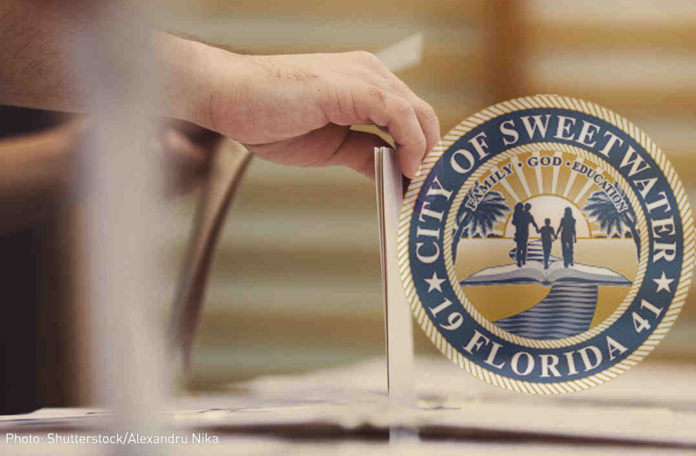 Sweetwater, FL – If you’ve lived in Sweetwater for at least 2 years and have dreamed of entering politics, or would like to actively participate in what direction Sweetwater’s long-term direction is headed, now’s your chance to take advantage of the freedom and rights that have made this country so great, by running for local political office. There are a total of 4 seats up for grabs on the Sweetwater local city council also known as the Sweetwater Commission. Of the 4 seats, 10 people are running for commissioner, as listed on our 2017 Sweetwater Elections Candidate Preview article.

Carmen Garcia, who serves as the City of Sweetwater’s City Clerk, will be accepting candidate registrations during its qualification period from today until March 24, 2017. According to Ms. Garcia, the only requirements for someone to become a candidate for commissioner are

If you qualify as a candidate, we suggest considering the following top 5 reasons to run for office in Sweetwater:

5. Shake up the establishment

Sweetwater is like many South Florida municipalities in dire need of new blood and political outsiders without ties to establishment politicians. For years, maybe decades, there have been two major political powers in Sweetwater: a group loyal to former commissioners Jose M. Diaz and Jose “Pepe” Diaz, and those loyal to Orlando Lopez and former Mayor Manny Maroño. It’s literally been the same people in power for more than a decade. Any outsider shaking things up with a new perspective could be just what Sweetwater needs. Also, with no term limits, Sweetwater politics is mainly full of old people and in need of younger folks (Any FIU Undergrad/Grad students interested?).

Sweetwater politicians, namely commissioners, have made a pretty comfortable compensation and benefits package for themselves. Commissioners get tens of thousands of dollars of compensation, with the following perks paid for by city taxpayers:

After reviewing the 2016-2017 legislative budget, the annual compensation for the 7 Sweetwater Commissioners totals between $32,331 to $90,521 PER COMMISSIONER!

Some say they’re overcompensated for the minimum workload they have.

Sweetwater Commissioners have, at minimum, the requirement to show up for 1 regular commission meeting once a month (first Monday of the month) for about 2 hours per meeting, rarely double that time, to sit and discuss the public matters of the city. During the meeting, they vote yes or no on ordinances and resolutions that affect residents, businesses and and visitors to the city. Although a few commissioners barely ever participate in discussions, all commissioners vote. There are a few extra meetings per month, titled “Special Commission Meetings” which can last between 30 min to more than 2 hours.

Calculating the number of hours each commission meeting lasts (2-3 hours), with a few extra special meetings per month (2 extra meetings at 3 hours each), for a total of 9 hours per month, multiplied by 12 months, equals 108 hours.

Let’s take into account their total yearly compensation according to the yearly budget for 2016-2017.

This is outrageous considering the median household income in Sweetwater, FL was $35,711 in 2015 (http://www.city-data.com/city/Sweetwater-Florida.html). That comes out to $17.17 per hour for an entire Sweetwater household.

Being a commissioner in Sweetwater is a powerful position. This means you’ll be able to shed light on problems overlooked by the establishment politicians. You’ll have a voice in a public forum which, thanks to the last five years of scandals, is highly visible among South Florida news outlets. You will be empowered by municipal code to create new initiatives, find solutions for critical issues, and engage residents and visitors for feedback. Very few to no opportunities in the private sector will be as possible to obtain or will have a direct impact on where you live as this opportunity to run for office in a South Florida municipality.

2. Be a part of Sweetwater’s college-town transformation

Sweetwater has only recently begun to realize something they should’ve reacted to many years ago: Such proximity to FIU creates a need for a booming college town. FIU is a humongous community of 60,000+ students, faculty, staff and visitors. The school itself has a budget of more than a billion dollars and is listed among the largest schools in the country in terms of enrollment. It only makes sense for Sweetwater commissioners to facilitate an environment that appeals to the college community.

Sweetwater has two fancy off-campus housing buildings in 109 Tower and 4th Street Commons. Sweetwater has made great strides to develop its first transit management association in the University Transit Management Association (UTMA), held initiatives for planting more trees to beautify the city and revamping the measures to improve pedestrian traffic. Most importantly, 2017 is reportedly the year in which construction for the 109th ave and 8th street pedestrian bridge will begin, a much anticipated landmark among FIU students.

The next 10-15 years will define how quickly Sweetwater embraces the future as a college town, or retreats to the old ways of pandering to “los viejitos” or the politically-active group of elderly residents.

1. Political environment in Sweetwater is ripe for newcomers

With a record-number of negative news coverage in Sweetwater and a growing number of frustrated voters, the political environment in Sweetwater seems more and more ready for a newcomer.

Out of the 4 seats, 10 people are running for elections, two are incumbents seeking to keep their seats (one incumbent has 16 years in office with most elections uncontested), two have been appointed (both have lost elections for commissioner), and the other six are mostly challengers with or ties to someone serving in office.

Similar to the Presidential win of Donald Trump over an establishment-favorite Hillary Clinton, the chances for an outsider with a well-planned campaign winning a commission seat are greater than ever.

In conclusion, we at Sweetwater Post love political competitions and we will be glad to provide exposure to any newcomers via our website, as we are providing free exposure to all candidates in Sweetwater.