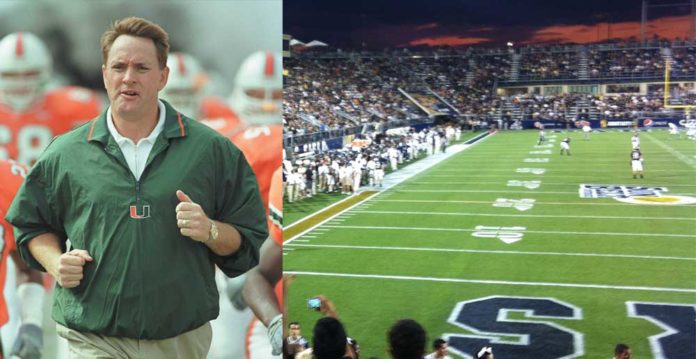 <a href=”https://www.google.com/maps/place/FIU+Stadium/@25.7525014,-80.3778912,15z/data=!4m2!3m1!1s0x0:0xf86989abba87061f?sa=X&ved=0ahUKEwitgpvtvanQAhVGQCYKHU1mCfcQ_BIIgwEwCg” title=”FIU Stadium – University Park, FL” target=”_blank”>University Park, FL</a> – In a stunning move by Florida International University Athletics, Butch Davis joins FIU to become the new Football Head Coach. Davis is widely known in South Florida as the man who brought the University of Miami football back to national prominence before leaving to the NFL and returning to coach college football at North Carolina.

Davis began his head coaching career at the University of Miami after leaving the Dallas Cowboys in 1995, where he coached under Jimmy Johnson during a period in which the Cowboys won back-to-back Superbowls. Davis took over a University of Miami football program riddled with sanctions in 1995, and through creative recruiting that focused on talent within Miami-Dade County, Davis brought in legendary talent like Santana Moss, Reggie Wayne, Willis McGahee, Dan Morgan, and a multitude of other NFL first-round picks. His Hurricanes football team achieved a major Sugar Bowl win in 2000 before he left to coach the Cleveland Browns in the NFL. The same Hurricanes team won the national championship the following year.

Butch Davis was also a Head Coach at the University of North Carolina football program during the 2007-2010 seasons, bringing big wins against major football programs such as Notre Dame and Georgia Tech.

During 2016, Davis was seen by some as the best candidate to replace Al Golden as Hurricanes Football Head Coach and bring the program back to national championship contender status. The Hurricanes ended up hiring fired University of Georgia Head Coach and former FSU offensive coordinator Mark Richt. The Hurricanes are now 6-4 with four losses in a row to FSU, North Carolina, Virginia Tech, and Notre Dame.

FIU Football is now 3-7 en route to its fifth straight losing season since firing former Head Coach Mario Cristobal, who served as a Graduate Assistant under Butch Davis during the 1998-2000 seasons.