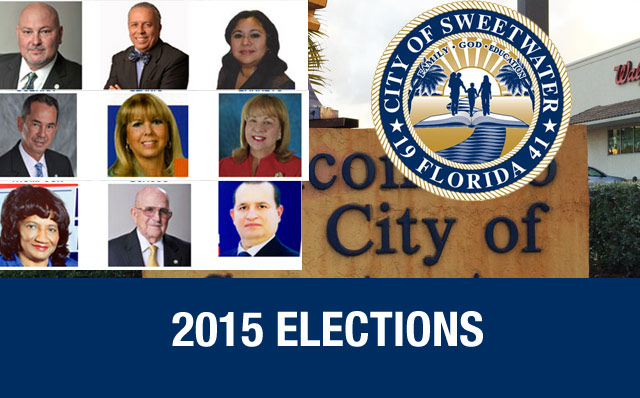 Sweetwater, FL – This election, like any other election in Sweetwater, you’ll search online and find little to no biographical information about most of the candidates that want to run for the office of Mayor and Commissioner.

These are people hoping to have the chance to make decisions that will likely affect the lives of thousands of Sweetwater residents and businesses. Aside from the votes they ask for, they want little to do with the public. It seems most local politicians have no interest in having the public get to know them. We’ve attempted to find and provide in-depth biographical information about each candidate, and no matter how easy we make it, nearly all are “too busy”, “too sick”, or unavailable.

Commissioner Jose Guerra seems to never answer emails or phone calls. He’s almost mysterious: extremely difficult to get in touch with and evades any kind of press.

Idania Llanio: the Sweetwater resident challenging Commissioner Jose Guerra for his seat is just as evasive to our requests as Mr. Guerra, in recent months, she has not responded to any of our interview requests.

We’ve asked Commissioner Prisca Barreto for a brief interview multiple times, and most recently, we caught up with her while she was hurriedly campaigning in the western portion of Sweetwater, she handed us a business card with a hand-written email address as a way to get in touch with her. Unfortunately, the email address was not legible and turned out to be fake.

Orlando Lopez: when available, is glad to answer questions and discuss Sweetwater issues he’s passionate about, he’s also very knowledgeable on city matters (he’s been a commissioner since 2001). Unfortunately, he rarely responds to our emails and phone calls.

Saul Diaz: one of the few candidates in this year’s election that has actually responded to our requests and questions. Read our analysis of Mr Diaz.

Douglas Mayorga: The Chamber of Commerce Director and Sweetwater resident is one of only two candidates that have replied to our requests for interview. Seems pretty open to answer questions from the press, no matter the difficulty. Read our analysis of Mr. Mayorga.

Elsa Thompson: She’s been unable to respond to our 3 months worth of requests for interview, in person, by phone, or by email, because she is “sick from her throat” and apparently has been for months.

Manuel Duasso: We asked the commissioner with one of the longest active tenures as a Sweetwater elected official for his comments on different issues but Mr. Duasso doesn’t want to comment on anything or give any kind of statement to the press, until “after the elections”

Deborah Centeno: the twice-failed candidate for commissioner is now running for Mayor of Sweetwater. We recently spoke to her and her husband, who is her campaign manager, over the phone. Their reply to our request for an interview was, “we’ll get back to you, we have to discuss this with ‘our people'”.

Much to the frustration of voters and local journalists, the closer it gets to election, the more likely it seems candidates for Sweetwater commissioner and Mayor will not open up to the public.