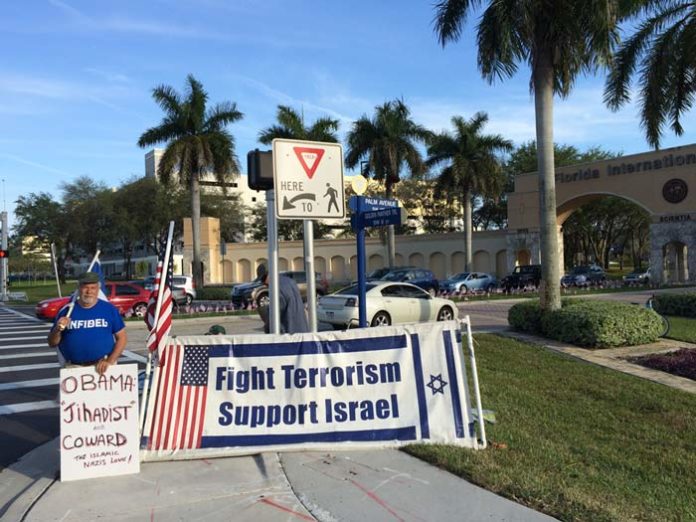 University Park, FL – “He should be impeached”, exclaimed an activist at FIU, voicing frustration over Obama’s failed Iran policy.

With West Miami-Dade motorists driving by and honking to show support, a group of activists standing near the Florida International University Entrance at Tamiami Trail protested Obama’s visit to FIU’s Modesto Maidique Campus Wednesday afternoon. This is their 725th rally since October 2007.

Bob Kunst, Shalom International’s President recounted the venues where their rallies were held in the past week alone.

“We had 300 Muslims at the Ft. Lauderdale federal building screaming ‘Jews into the ovens’… Nashville, Atlanta, in front of the White House, in Downtown Miami, just in the last week. We’re in grave danger. Obama’s not our friend, not for Israel, not for America..”

Shalom International, a pro-Israel group established in 1989, organizes anti-Nazi and pro-Israel events throughout the world.

Kunst, a registered Democrat, shares the sentiments of many Americans now frustrated with the decisions of the current administration especially in regards to Iran.

“An opposition group announced just yesterday announced that Iran has a secret (nuclear) facility that’s building these weapons underground. So it’s not just Israel at stake, it’s America at stake..”

Listen to the full interview audio.

To learn more about Shalom International, visit their website http://www.defendjerusalem.net/